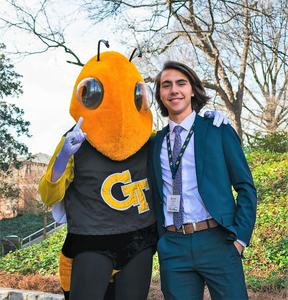 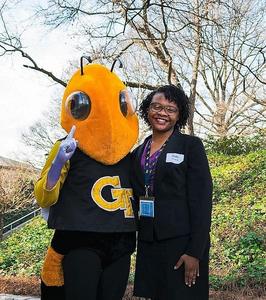 Valdosta High School seniors Jada Crockett and Bryce Jackson are 2019 recipients of the STAMP scholarships; Georgia Tech’s highest scholastic honor. This outstanding accolade ensures a debt-free four year undergraduate experience for both of them, as well as a quality educational experience.

Since the scholarship is only offered to the top one percent of all first year students, only 40 students from the incoming class receive this honor per year; 20 of whom are native to the state of Georgia. Jada Crockett and Bryce Jackson are two International Baccalaureate (IB) seniors who in the top three of their graduating class. The two discovered that they received the scholarship on March 15th.  At honors night May 7, Jackson was named Valedictorian, and Crockett Third Honor Graduate in the class of 2019.

The STAMP Scholarship chooses from the existing pool of up-coming freshmen who applied early action. Approximately 300 students are initially considered. Following a local interview, the selection of candidates narrows down to about 100 students. After the final interview, 40 of the remaining applicants are granted the scholarship, while the other 60 receive a different form of financial aid.

The STAMP Scholarship is a four-year, full-ride scholarship, offered to exceptional students who have been accepted early to Georgia Tech. Students are selected for their holistic excellence in an attempt to bring those who they believe will have a meaningful impact on society, to prominence. Their overall potential is judged through their leadership skills and their service throughout their high school career. The main objective of the STAMP Scholarship is to help shape gifted students into remarkable leaders while also alleviating their financial burden. Those who are accepted for the STAMP scholarship receive generous perks, such as priority housing, free laptops, meal plans, books, academic supplies and personal stipends.

Crockett asserts, “It’s for the people who really take their education seriously but also like to contribute themselves to the world. Basically, through the STAMP scholarship, its foundation, and Georgia Tech, the students are provided with opportunities to get out of their comfort zone while also giving them a nice foundation to fall upon if they fail.”

Jackson was accepted to Georgia Tech early action in December, having initially applied because of its outstanding engineering and computer science programs. According to him, the engineering scene at Georgia Tech is incredible, making it the only place that he could possibly attend. Jackson believes that the leadership that he exhibited in the International Baccalaureate (IB) program, his church and sports, made him a strong candidate for the scholarship. On top of that, Jackson did copious amount of research, including speaking to other STAMP recipients and practicing his interviewing skills in order to feel confident for the intense process. When asked what advice he would give to others who are vying for the STAMP scholarship, he stated, “If you’re anything like me, don’t freak out about it. You’re going to want to just think that you’re not qualified or ‘all of these people are geniuses in comparison to you’ - and sure, a ton of them are geniuses, but the reason that Georgia Tech selected you for the scholarship in the first place is because you fit the pillars. You fit the things that they want to see out of you and the whole interview process is just them trying to see who fits the best, so just be you and don’t hide who you are. Answer the questions honestly and they will respect that.” Jackson feels that Valdosta High School has equipped him with a finer understanding of diversity, having been immersed in the community, as well as studying various cultures in his IB classes.

Like Jackson, Crockett sought out Georgia Tech for its engineering program, as she aspires to be a civil engineer. Georgia Tech has long been a dream school for Crockett. She excels at math, but is also artistically-inclined, so she feels well-equipped to pursue civil engineering. Service has always been important to Crockett and her work throughout high school is indicative of her desire to help others. Crockett believes that Valdosta High School has presented her with many opportunities through her participation in the IB programme, Beta Club, and Student Mentoring in Life and Education (SMILE). She believes that the school has provided her with a platform and taught her the value of service. Through Beta Club and SMILE she has baked cookies for prisoners and helped organize the Special Olympics, which inspired her to successfully petition the school for a fume hood for her chemistry classroom from the school board. This type of leadership is what made her such a strong candidate for the STAMP scholarship.

Valdosta High School and Georgia Tech both know that the future is bright for these two young scholars from the class of 2019.