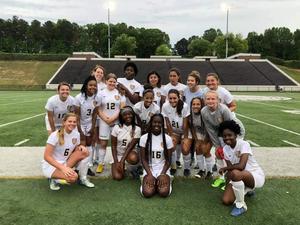 After graduating most of their starting lineup from the 2017-18 season, many assumed that the VHS Girls Soccer Team would be a weak opponent during the 2018-19 season. Instead, the Lady Cats made school history by winning their first state playoff game ever.

At the beginning of the season, the Lady Cats appeared average at best winning only half of their scheduled games.  However, the girls kept training and under head coach Rebecca Chesser’s tutelage, the team soon showed improvements on the field in teamwork and ball control.

Later in the season, Valdosta played against Coffee County to determine who would be seeded third going into the region playoffs and who would have to compete against Northside Warner-Robbins to win a place in the playoffs. Thanks to a stellar defense by the Lady Cats, the game remained tied at 0-0 throughout both halves and overtime.  However, Coffee County won during penalty kicks at the close of the game, pushing the Lady Cats into an extra game to qualify for the region playoffs.

The Cats returned with a new fire and beat Northside Warner-Robbins to enter the playoffs seeded at fourth place.  The Lady Cats would travel to Coffee County and defeat the Lady Trojans on their home turf, ending third in the region for the regular season.

Unfortunately, the Lady Cats would suffer defeat at the feet of Heritage High School in Conyers, Georgia, ending their playoff season.  The Lady Cats had a distinguished season and will miss the leadership of Seniors Miracle Gosier, Mary Grace Nix, and Alyssa Stein.  The Lady Cats are looking forward to having an awesome season next school year.