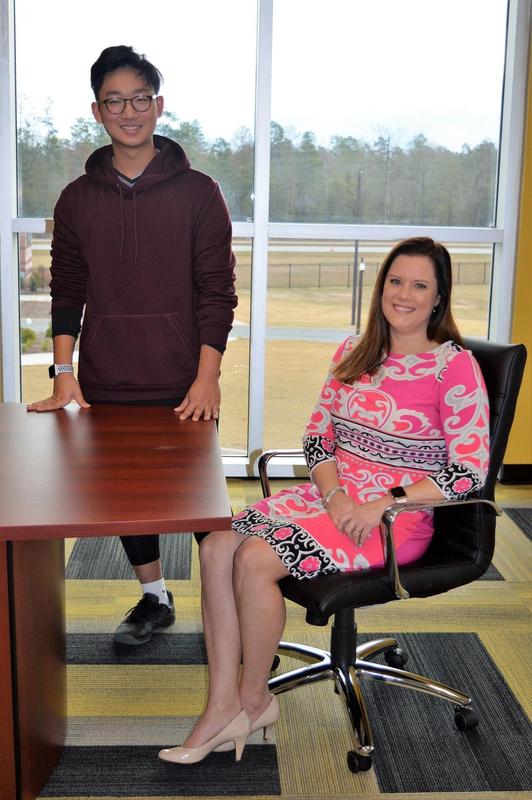 Dr. Janice Richardson, Principal of Valdosta High School, announces that Albert Kang, son of Dr. Myung Soog Lee and Dr. Jonghoon Kang, is the 2020 STAR student, and he has chosen Joy Eldridge, his IB Psychology teacher, as his STAR teacher.

The PAGE Student Teacher Achievement Recognition (STAR) program, now in its 62nd year, is sponsored, administered, and promoted by the Professional Association of Georgia Educators (PAGE) and the PAGE Foundation. Since its creation, the STAR program has honored nearly 27,500 students and the teachers they have selected as having had the most influence on their academic achievement. To obtain the 2020 STAR nomination, graduating high school seniors must have the highest score on a single test date on the SAT and be in the top 10 percent or top 10 students of their class based on grade point average.

STAR begins each year in participating high schools throughout Georgia when the STAR Student is named and chooses a STAR Teacher to share in this recognition. The students and their teachers are honored by their schools and receive special recognition in their communities from one of the more than 170 statewide civic organizations and businesses that serve as local sponsors of the STAR program. In Valdosta, the Kiwanis sponsor VHS’s STAR student and teacher at the region banquet to be held March 12, 2020, where Kang and Eldridge compete for region honors. Region Winners compete for the honor of being named State PAGE STAR Student. STAR Teachers continue on with their STAR Students at every level of the program.

Kang, who lives in Lowndes County, chose Valdosta High School following St. John’s Catholic School for its academic programs, specifically the International Baccalaureate Program. Kang acknowledges that, “It was originally hard adjusting to city schools from a small private school (St. Johns) but I eventually learned to love the larger school atmosphere.”  He also notes that most of his friends attend VHS.  While in high school, Kang has participated in Debate, Tennis, and dual enrollment, while working as a research intern at Valdosta State University. He says that his “dream schools” include Stanford and Brown with a major in economics/environmental studies.  As for a career, he sees himself working as a financial advisor for a start-up and then ultimately as an environmental lawyer.

Kang chose Joy Eldridge, his Advanced Placement World History and IB Psychology teacher as his STAR teacher.  Eldridge holds degrees from Valdosta State University and Troy State University and is a 20 year veteran teacher at VHS.  She teaches IB Psychology, AP Psychology, and AP World History. Regarding Eldridge, Kang notes, “She is super hard-working, taking on multiple AP and IB classes while on the block schedule. Her daily efforts tell me that she really cares about the success of her students.”

Regarding Kang in the classroom, Eldridge says that he is the kind of student who made it known immediately “…that she would have to be at the top of her game.” She adds that it didn't take her long to see that Albert is more than just a "smart kid."  Eldridge continues: “Albert will be a life-long learner.  He not only wants to get the right answer, he wants to understand why something is right.  Albert always tries his hardest to get every point possible on any assignment and will explain why he thinks he's right all the time.”

In addition to the STAR program, The Professional Association of Georgia Educators honors outstanding students and educators with scholarships, and encourages academic excellence through competitive programs such as PAGE STAR, the PAGE Academic Bowl for Middle Grades, and the PAGE Georgia Academic Decathlon.