VCS to Honor Juneteenth - All Schools and Buildings to be Closed on Monday, June 20 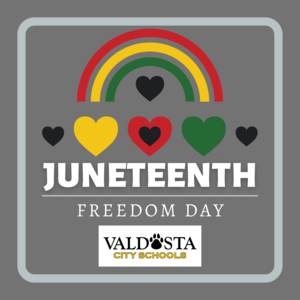 On June 19, 1865, Union troops arrived in Galveston, Texas, the most remote part of the Confederacy, to announce that the Civil War had ended and that all enslaved people were now free. Often referred to as the country’s “second Independence Day,”  Juneteenth proclaims freedom and has been celebrated in many parts of the country since the late 1800s.

All Valdosta City Schools staff and Summer School students will have the day off on Monday, June 20, the district will reopen on Tuesday, June 21.