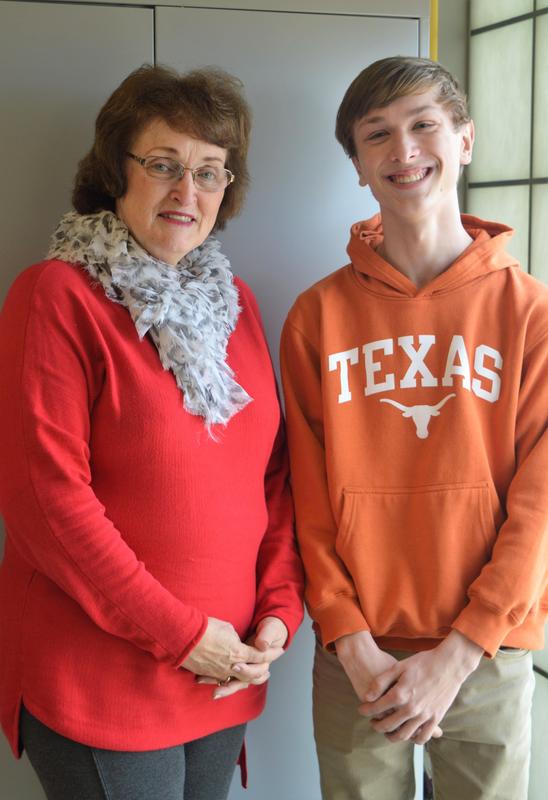 The Georgia Student Teacher Achievement Recognition (STAR) award is awarded to the senior with the highest SAT score in one sitting who also ranks within the top ten percent of their class. Nominees’ SAT scores must be equal to or be higher than the SAT National Average scores on the Evidence Based Reading and Writing and Math sections. High school STAR Students are asked to name their STAR Teachers. Statewide, the Professional Association of Georgia Educators (PAGE) Foundation sponsors the program and has honored more than 25,000 high school seniors since 1958. Locally, the Kiwanis Club of Valdosta sponsors the Valdosta High STAR student and teacher.

Principal Dr. Janice Richardson announced Valdosta High School’s 2019 winners are student, Noah Carroll, and teacher, Gnann Moser. Together they will be recognized at a local banquet honoring each STAR student and teacher in the region March 7.  That evening, the highest scoring STAR student will be awarded the region title and then go on to state competition in Atlanta where they compete for PAGE STAR scholarships and awards. STAR Teachers continue on with their STAR Students at every level of the program.  STAR teacher is truly one of the most prestigious honors for a teacher, because the student selects her from every teacher he’s ever had.

Upon being distinguished as the STAR student, Carroll chose his Advanced Placement English teacher, Gnann Moser, as STAR teacher. Moser, who has taught English for 43 years total with 37 of them at Valdosta High, is thrilled to be named STAR teacher for the fifth time. Most of these high achievers have cited her for significantly improving their writing skills. Regarding Moser, Carroll asserts, “She offered me help when I was battling my chronic illness, and my writing has improved tenfold this year.”

Carroll suffers from a chronic illness called Postural Orthostatic Tachycardia Syndrome (POTS), causing him to have to been hospital homebound since the latter part of his eighth grade year up until the end of tenth grade. Being hospital homebound prohibited him from extensively competing with some of the extracurricular traveling teams, making his recent academic achievement more of a triumph; although despite his health, he was able to participate in Math Club, Drama, and Academic Bowl. After taking the SAT the first time, Noah retook it to improve his score. He explained, “After the first time, I was disappointed in my score because I knew it could be better. So, I started practicing a few hours a week and was able to improve my score by 140 points.” This fall, Noah will attend the University of Texas at Austin in order to study mechanical engineering at the Cockrell School of Engineering.

Moser has high praise for Noah as well, saying, “Noah Carroll is truly one of the most interesting students I have taught in a very long time because he interjects amazing insight into literary analysis in both classroom discussion and compositions despite his dislike of the English/Language Arts Curriculum.” Moser was pleasantly surprised that she won, since the previous four students who selected her, like Noah, were also partial to Math and Science and not English. Additionally Moser adds that she admires the fact that he races 125cc go-karts competitively as an indication of his desire to major in mechanical engineering, with a possible focus on automotive/racing.